There is a metro system in Paris, able to bring you to any place of the city. Following the stairs under the ground yo 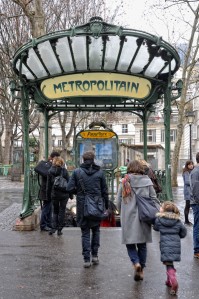 u’ll find long tunnels with tiled walls. The tunnels are quite light and kind of clean. On some tracks you’re faced with strong cold wind. Others smell a bit strong. Many stairs are on your way down to the platforms, sometimes supplemented by escalators. But: you won’t find an elevtor for your luggage or disabled people with a wheelchair. The trains are quite modern, clean and in good shape. Also the tunnels and the platforms.

At each entrance are gates to check your ticket. The single tickets and the tourist tickets have a magnetic strip on the back. You have to put your ticket in a ticket reader at the gate. After automatically checking the ticket, you get it back and the gate opens. So some gates have a contact less ticket reader for subscription tickets other have the trench for the single ticket as described above.

Now look carefully for your platform. Each platform is used for ony one train. So you can find usually at least 2 platforms in each station, sometimes more. Clear signs lead you through the undergrund. Usually they say the final stations name, sometimes also the stations names along the way to the terminal station.

The metro does not operate the whole night. So, check the operation times, when in Paris. During the main hours the trains come every few minutes. Sometimes they are quite full, so don’t worry and take the next one in 2 minutes.

Every now and than you will notice music in the stations or even in the trains. Local street musicians are trying to raise money (begging) for their life costs by playing for the public. I saw (and heard) old men, young men and young women playing violin, contabass, saxophone, trumpet, harmonia and accordion. Some were also singing. Some were quite good other not that much. Some were even selling CDs with recordings of their playing.

to be continued soon …

(Don’t forget to look at my previous post about Paris) 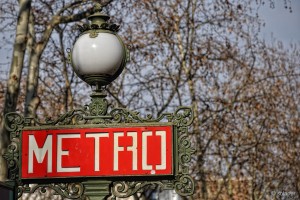 3 thoughts on “The Parisian Metro”