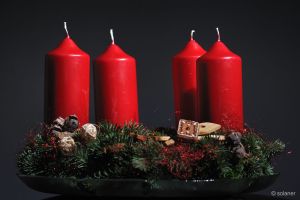 (btw. in another past post, I’ve written a bit more about the special holidays before Advent).

The time surrounding the 4 Sundays before Christmas are called Advent, meaning preparation, pleasant anticipation and expectation.

Back in the first half of the 19th century a protestant pastor got the idea to visualize these 4 Sundays until Christmas each with a candle mounted on a wreath made of fir twigs. Each Advent Sunday one of these candles is inflamed, while the candles of the past Sundays are still burning. So, you have one candle burning on the first Advent, two candles on the second Advent, three on the Third and all four candles on the fourth Advent. The christmas tree won’t be erected before Christmas Eve on December 24th (although many families do this earlier nowadays and don’t wait until December 24th).

Over the next years the idea spread over Germany and became about 100 years later common even in catholic regions. Nowadays you can find Advent Wreath in nearly every home, church and even many shops.

It’s also quite common, to put a few pine twigs with some decorations in the homes. The traditional colors of this time are green, red and yellow.

The green stands for live and hope, even in this dark and unfriendly time, when nature seems dead. Only firs and pines are green in this time of the year, so they are also a symbol. The burning candles are a symbol for Jesus, the light of the world. The other parts, like the color of the candles, the further decoration or the order for the inflammation of the candles are part of regional different rules. The shape of the wreath stands for eternity, because a ring has no end.

So, I wish you a happy, peaceful and joyful Advent time wherever you are and whatever tradition, country, religions or ethical group you belong to.