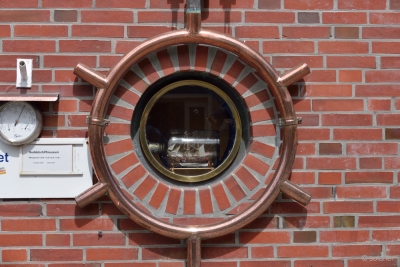 Insider’s tip: here by the harbour of Neuharlingersiel you can also find the famous Buddelschiff Museum, a museum dedicated the fine art of building ship models inside an empty bottle (Low German dialect: Buddel – speak booddle).

This tradition was quite common along the German coast because of many men have been sailors on big ships. You know, sailors are known for drinking much alcohol and so have many empty bottles. One day in the past, one of the sailors came up with the idea of building a model of the ship he was working on and place it inside an empty bottle along with a symbolised ‘landscape’. The Buddelship was invented. And nowadays you can find them everywhere along the German North Sea coast.

The Buddelschiff Museum is a small private museum with about 100 different Buddelschiffen. Unfortunately, it was closed when we were there, because we visited Neuharlingersiel off-season. But, I was already in a few years ago. It’s really astonishing what a filigree work the rough sailors hands have been able to create. So, check the opening times in advance on the web. It’s worth a visit. And you can also learn, how to get the ship inside die bottle 🙂

But, at least I have the one Buddelschiff from the outside window for you 🙂