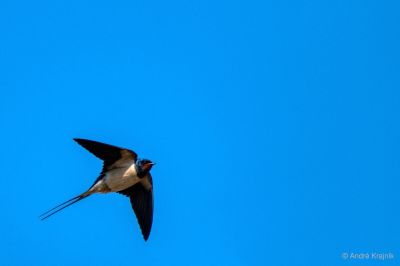 Recently, I showed you an image of an in-flight bee fly. Although it was hard to capture that tiny insect with the long focal-length lens, it was not that hard as capturing this image of an in-flight swallow. Despite, bee flies are very small, their flight is kind of predictable. They are not flight that quick and they are not changing the directions abruptly. They also stay on nearly the same level above the plants.

Barn swallows instead are flying very quickly because they are hunting flying insects and thus changing their flight direction and hight unpredictable. Compared to this, the bee fly simply ‘stands still’ in the air, although she was also constantly moving.

This image is from early April and I was very surprised to see a barn swallow so early. The air was still cold (below 10°C). As far as I know, that’s the minimum temperature for insects to be able to fly.

There were years when swallows came back from the south too early when the air was still cold. The air had temperatures too cold for insects to fly which resulted in hungry swallows. Hunting for flying insects was without results, because of the cold. So they were forced to walk around and pick plant lice from the bushes because they were too weak to fly from all the unsuccessful hunts. A friend of mine, a nature conservationist, reported that year swallows simply falling off the sky. They died of hunger while flying.

I was in that place before and met hundreds of swallows. But, it was June and warm. So I was surprised to see one (two on the next day).