and for all the other people, too, everywhere on the world, regardless where you are and which your native language is: have a merry and peaceful Christmas.

Christmas is the time of giving gifts to (and receiving from) parents, partners, kids and friends. When all the gifts are laying below the Christmas tree, the kids usually attack their pile and unwrap their gifts in the shortest time, much faster, than you were able to warp them with beautiful paper and decorate them with bows and stickers. When having more than one kid, they all do it at the same time. And you, as the giver, can’t notice, if they are happy about the gift nor you can notice any reaction.

To calm down this chaos, we had an idea some years ago. Instead of giving each kid a pile of gifts to unwrap, we put them all on one single pile and attach a little batch with the name of the recipient. (You can certainly still put them on separate piles for a better overview). On the table we set up a game board (the first version was made of LEGO many years ago) with ~28 (8 + 6 + 8 + 6) fields. A figurine represents each family member(i.e. an angle, a toy-car, an anima or a small bell). Rolling a dice helps to move the figurines forward: one field for each dot shown on the upper side of the dice. Some of the fields have special meanings.

Our board has these icons on the fields:

The next person is allowed to roll the dice, not before the gift is completely unwrapped and everyone had the opportunity to see it.

The youngest kid is allowed to start with rolling the dice (or the oldest person or the one which first letter of the name  cast first in the alphabet or the mother or the one with the highest number during a pre-round). Be creative!

The activity cards are put in two special fields in the inner part of the board with the text side turned down. They are parted in two piles: one for the question mark (more general questions = fact check) and one for the activity icon (more personal questions). The person which figurine arrives on an activity field gets a card from the pile, turns it around and reads it loud. Than, he or she has to follow the order on the card. Here are a few examples:

When all activity cards are used, mix them and put them on their place again. Or, put each used card below the pile.

This way, everyone is able to see, what that person got and how she enjoys the gift. No-one is ready unpacking her pile of gifts too quickly and can pay each giver the necessary respect. It’s a family event instead of a single experience.

As you can see, the rules are very simple. Even a pre-school kid is able to follow the game. It’s fun, playing together and see the joy in each others eyes.

This is a good habit for our family, and maybe for you, too. Include the kids when preparing the game board and setting up the rules. Write the rules on the board. Decorate the board and the cards with Christmas related icons. Let each kid bring his or her favorite small figurine as her meeple.

We usually need about 1,5 to 2 hours for the game and the unpacking when having 5 player. It’s a lot of fun and very relaxing.

Now, you have 12 months to create you own game. I’d love the see your results. You can put your response in the comments below or create a blogpost on your own and leave me a back-ping. 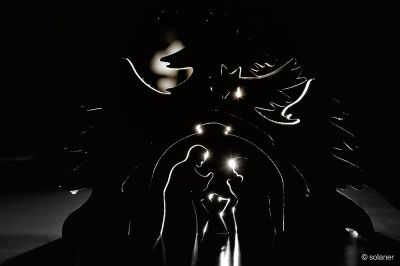 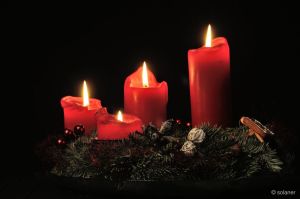 The time surrounding the 4 Sundays before Christmas are called Advent, meaning preparation, pleasant anticipation and expectation.

Back in the first half of the 19th century a protestant pastor got the idea to visualize these 4 Sundays until Christmas each with a candle mounted on a wreath made of fir twigs. Each Advent Sunday one of these candles is inflamed, while the candles of the past Sundays are still burning. So, you have one candle burning on the first Advent, two candles on the second Advent, three on the Third and all four candles on the fourth Advent. The christmas tree won’t be erected before Christmas Eve on December 24th (although many families do this earlier nowadays and don’t wait until December 24th).

Over the next years the idea spread over Germany and became about 100 years later common even in catholic regions. Nowadays you can find Advent Wreath in nearly every home, church and even many shops.

It’s also quite common, to put a few pine twigs with some decorations in the homes. The traditional colors of this time are green, red and yellow.

The green stands for live and hope, even in this dark and unfriendly time, when nature seems dead. Only firs and pines are green in this time of the year, so they are also a symbol. The burning candles are a symbol for Jesus, the light of the world. The other parts, like the color of the candles, the further decoration or the order for the inflammation of the candles are part of regional different rules. The shape of the wreath stands for eternity, because a ring has no end.

So, I wish you a happy, peaceful and joyful Advent time wherever you are and whatever tradition, country, religions or ethical group you belong to.

Have a great Advent time!

A Christmas market is not simply a modification of a regular farmers market. Other than a farmers market it opens at about 10 or 11 a.m. instead of 7 a.m. and instead of closing a noon, it stays open until about 8 p.m.

You can buy spices, fruits (during my childhood the Christmas market was the only source for buying oranges, mandarins and some other exotic fruits for the South). You can also buy candles and decoration stuff, but also some food to make you warm from the inside again or some alcoholic drinks like hot spices wine.

While the markets exist in the bigger cities from about mid November until December 23rd, they are set up only for the weekends in smaller cities. Sometimes even for only one day or one weekend. Even some farms set up Christmas markets. Often these farms grow Christmas trees and thus combine the Christmas tree sale with a small Christmas market to attract additional customers.

Have a great Advent time!