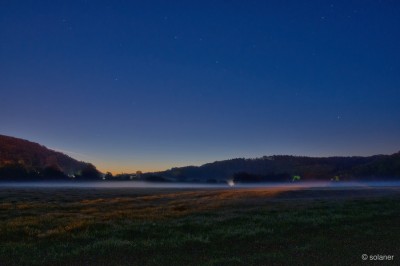 In this image, we have, besides the first light of the day, the first-morning fog, and the last stars in the sky. It’s taken literally between night and day.

In the ancient roman mythology, the sun-god Sol (Helios in greek) has a messenger driven ahead of him: Aurora (Eos in greek). She has her own carriage and prepares the path for her following brother.

We left all those old roman and greek gods and goddesses far behind, but each sunrise is still announced by wonderful dawns.

Have you ever observed a sunrise in peace without any hurry? If not, try it. Get up early at night, take some warm clothes and a torch and go in the fields. Look for a place, END_OF_DOCUMENT_TOKEN_TO_BE_REPLACED