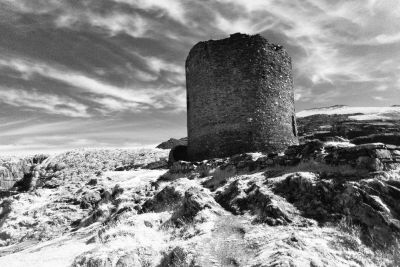 Today, I want to show you an infrared image taken during my last trip to Wales.

To get sharp images in IR you have to adjust the focus. IR has a different behaviour when it comes to sharpness, then the visible light. Each wavelength has its own behaviour. In IR the sharpness point is a bit to the left. I.e. when focussing on an object 5 m in front of you, you have to shift the focus back a bit i.e. to 3.50m. You have to find out the correct setting by try-and-error. Back in film days nearly every lens has had these extra marks on the distance control for IR. Thus, I recommend using an old lens for IR photography. Anyway, use your display and check your images carefully for sharpness – despite it is very hard to recognise sharpness in all the reds on the small screen. 🙂

For the above image I put an 720nm IR filter on front of my lens for blocking all rays with a wave-length shorter than 720nm. I also have a 760nm IR filter for monochrome images. These filters extends the exposure time enormously. I have to use exposure times of about 1 second and above in full sun during the day. Thus I have to put my camera on top of a tripod, despite the sun 😦 To make things even harder, the filter in front of the lens won’t let visible light coming through. That makes the viewfinder dark. You can’t choose the right angle of view. Either you guess it, or you’re constantly detach and re-attach the filter to your lens for every image. Have fun 🙂

I like to let the filter in front of my lens and guess the right angle. It’s more fun and more interesting seeing the results. First of all, I do a manual white balance on green grass in full sun. Next, I dial in f8, ISO 400 (to shorten the exposure time a bit) and 1 second as a starting point. Photographing in raw is my default, so I don’t have to change this setting for IR.

I don’t have modified my camera to remove the highpass filter. That’s about 400€ depending on the exact kind of camera. On the other hand, you will not only get the filter removed (you get back short exposure times), but also the focus justified permanently. So, you don’t have to worry about the focus correction I mentioned above. You also usually get back a bright view finder. But the camera now has a certain filter inside: the camera is defined! And you’re not able to switch the filter i.e. to check out other wave-lengths.

For the above image I’ve used a filter, that didn’t block all visible light. So, I can get these color IR images.

I used an old APS-C DSLR, an old 28-70mm lens (qualified for capturing IR images), a tripod, a remote shutter release and much of sun 🙂 That’s not very wide (like 42mm on a FX camera). I wish, I’d have a wider lens. But, in film days they didn’t have had APC-C SLRs. So, such lenses aren’t available. 😦 I also won’t use a more modern DX lens, because they aren not tested under IR light. So, you probably see flares inside the lens resulting in ugly hotspots.

P.S. it’s also possible to photograph in ultraviolet. But, in that part of the spectrum I don’t have any experiences – sorry guys. 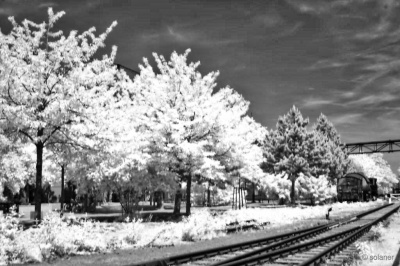 Here we have one of my old IR images. Shot with a not converted APS-C DSLR mounted on my tripod by using a manual focus 28 mm lens with a 720nm IR filter. More on IR on Thursday.

This image is developed by using ufraw and gimp. The conversion to monochrome is done with Tonality pro.

This is my contribution to Monochrome Madness organized by Leanne Cole. Look at here site on Thursday (Australian time), to see many more monochrome images created by many other talented photographers from all over the world.

I’d also encourage you to participate. The conditions are  published in each of her Monochrome Madness posts.