Isn’t this a quite funny headline? You know, I’m a photographer. As a photographer, I show you the world the way it is and how I see it. To bring my images to your vision, I need to develop them. For developing the raw data recorded by my camera, I need some software known as raw developer. It’s just like in the old days where the photographer took the exposed film out of his camera and put it in some chemicals to magically get colorful images out of a grey stripe of plastic.

In 1988, the first version of Photoshop was introduced. This was initially an image manipulation program and became later quite popular not only for advertisers but also for photographers. I personally don’t need these functions for my images. Beside working on deeps and highlights, vibrance, cropping, and sharpening I do nothing to my images. Thus, I only need a raw developer and nothing else.

One raw developer I work with is Luminar by Skylum. This product appeared first in 2016 for MacOS only. Now, it’s available for Windows also. When Syklum started integrating artificial intelligence for some reason, these features became more and more powerful and made life easier for people photographers as well as for landscape photographers.

The current version, Luminar 4, replaces all previous versions of Luminar, including Luminar Flex. So, saving edits as editable separate files isn’t possible anymore and I suspect, this won’t come back anymore. Even the option, to export an edit as a PSD file for Photoshop only saves it as a flattened file.

This past week, a new version of Luminar was released: Luminar 4.2

Although, this is a new minor version, the changes are remarkable! This version brings new tools to your hands. These tools are powered by artificial intelligence to enhance your images in a very natural way. I guess, most of the skills were taken over from Photolemur, a company Skylum took over after 2018. With Luminar 3 AI skills were introduced for the first time and enhanced with Luminar 4. Now, Luminar steps up quite further and brings some additional creative tools to your hand. To show you a bit about what’s possible, I attached one of my Images.

Here we are in Tromsø, standing at the edge of the harbor and looking over the fjord to the part of the city located on the other side of the fjord with the famous Arctic Cathedral. I included the clouds from an image taken about an hour earlier from the same place looking in the same direction while waiting for the blue hour. The other two objects (aurora and planet) are taken from the standard library supplied by Skylum with the installation package.

Despite, I don’t like these make-offs, it demonstrates what’s possible and how realistic it looks like. I have to admit, the software does a great job. Although, I focused here on the tools for landscape photographers,  I also encourage people photographers to have a look at Luminar 4.2, as it also includes some great AI-supported tools for them (AI Skin & Portrait enhancer and shine removal)

To test it on your own with your own images, there’s a test version available to download for free to check all features out. It’s available for Windows and for MacOS. A license is good for two computers.

When using the code “SOLANER” during checkout, you can save a few bucks. 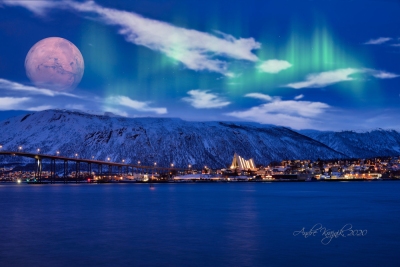