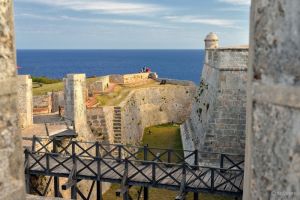 You might have seen this stronghold above the bay entrance at Santiago bay in my last post on the island Granma. Here you can find out a bit more.

This old spanish castle was built, to defend the citizens against pirate attacks, back in the 17th and 18th century. Nowadays you can visit the castle. You can walk around and visit many of the rooms from the top down to the storage rooms, the jail and the chapel.

Every evening right after sunset (appr. 6 p.m.) a group of soldiers, dressed up like the soldiers back in the 18th century, fire a cannon as a salut. You can watch that from a balcony above. This day, the group was commanded by a capitana, a female captain.

In Cuba it’s quite easy to decide which soft drink to order and to choose you sport.

If you’re a girl, you have to skate in-line skates and drink orangeade.

If you’re a boy, you have to skate on a skateboard and drink coke.

OK, I’m kidding. But the cans are real. Indeed, boys and girls can certainly order and drink both soft drinks, as well as the third one with lemon taste. 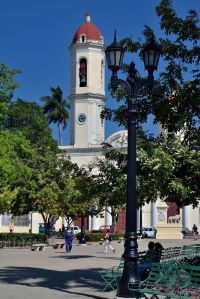 Cienfuegos is a quite young city. It was founded in 1881. When looking on a map, you can see, that this city is built by following a plan. The avenues and the streets forming a pattern. This plan was set up for the rebuild (1825) after a heavy storm, that destroyed nearly the complete old residential area. 1829 the rebuilt settlement got the new name Cienfuegos, derived for the spanish governor José Cienfuegos. In 1881 the settlement received the town carter.

We only were a few hours in this city for visiting the theatre located at the Parque José Martí, a nice and big square. Even it is called “Parque” (= park), I’d call it a square with some trees and other plants. When talking about a park, I have another idea how it should look like. On one of the small sides, you can find an arc de triumph build by french settlers for commemorating their origin.

Opposed to the arc you can find a very nice building, the Casa de la Cultura Benjamin Duarte. On the opposite side of the square you can find the Cathedral de la Purisma Conception.

In my next post I’ll show you the theatre en detail. 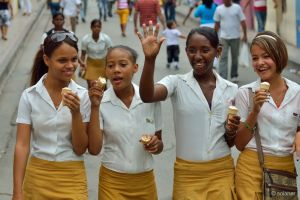 When talking about kids, like I did in my last post on Cuba, you also have to talk about education and schooling.

Cuban kids also go to school. Primary schools for the first 6 years are usually in the neighborhoods, secondary schools are a bit more centralized. In the country, where people live more distributed on their farms, schools are really small. In case, there are much too few pupils, the primary school teacher would even come to the farms for 2 or 3 days a week to educate the kids. To get this kids to go to the secondary school, the government offers residential schools.

School starts at 8:30h and lasts until 16:00h. The kids have to wear a uniform. The uniforms END_OF_DOCUMENT_TOKEN_TO_BE_REPLACED

… Cuba. In case you grew up in the 1980s you might have continued the words with ‘America’, as the title of a Kim Wild song sais. But even Cuba is part of the american continent, the subject is much more precise with the word Cuba in it.

When talking about people, there are also kids to talk about. Usually you can see poverty at first when looking at the kids. In Cuba I didn’t see any poverty. Although some houses looked like a renovation was necessary, the people looked quite good. Many, but not too much, kids were in the streets. Their clothes were in proper shape and they didn’t look END_OF_DOCUMENT_TOKEN_TO_BE_REPLACED 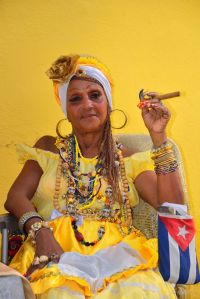 Cuban people are usually not shy. They are open-minded. In Havana you can find people dressed up in traditional ways to earn money from the tourists for getting photographed. But you can also ask common people for a photograph. Be open and ask for permission. Don’t shoot hidden, from a distance or out of the hip.

Even the Cubans are poor, I was very surprised for not seeing beggars. Cubans want to earn money. They try to sell i.e. cigars, invite to paladars (private restaurants), offering taxi services or making music. Santiago de Cuba was the only town we visited, where END_OF_DOCUMENT_TOKEN_TO_BE_REPLACED