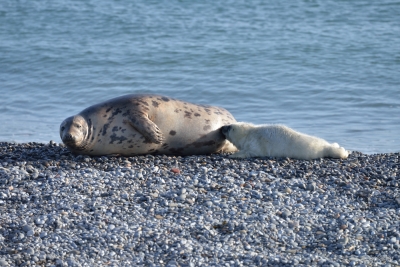 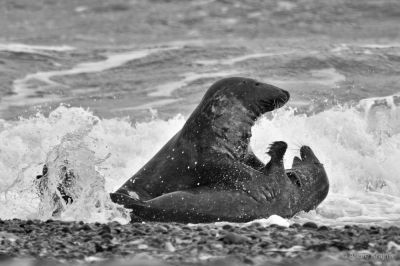 It’s still coupling season for the grey seals. So, this big male tries to convince the smaller female below him to give him a try 🙂 Despite this looks like a fight, it wasn’t.

This is my contribution to Monochrome Madness organized by Leanne Cole for more than four years now. Look at here site on Wednesday (Australian time), to see many more monochrome images created by many other talented photographers from all over the world.

I’d also encourage you to participate. The conditions are  published in each of her Monochrome Madness posts. 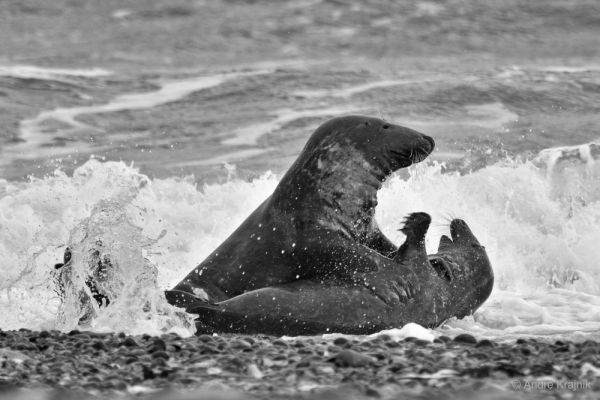 sic – yes, it’s a loving couple in the image above. The image is taken earlier this year during the mating season of the grey seals on Helgoland, a small island 60 km from the German coast in the middle of the North Sea. The North Sea is a part of the Atlantic ocean, located between the British main Island, Germany, Denmark and Scandinavia.

The grey seals get their babies during winter. It’s also their mating season. While the first wild grey seal was born in winter 1996/97, there were about 100 babies in 2011. 2016 there were already… 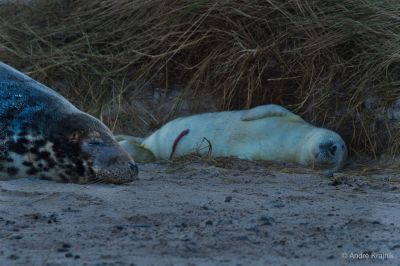 Last week I was on Helgoland again. For the third time (after 2011 and 2016), I met with some friends in January on Helgoland.

You could ask, why I travel to the North Sea in mid winter. It’s dark, wet, cold and the sea is rough. Only very few people find their way to Helgoland during winter. In summer, it’s a destination for yachtsmen and day tourists for duty-free shopping. But, in winter?????

We’re going there for seeing nature, animals (birds and seals). The grey seals get their babies during winter. While the first wild grey seal was born in winter 1996/97, there were about 100 babies in 2011. 2016 there were already more than 316 and this year more than 426 babies from October 1st until January, 21st (when we left Helgoland).

The baby in the above image was born only a few hours ago.

Although, these animals look so cute. Keep in mind, they are the most dangerous animal in Germany. A male wights up to 300 kg and is much quicker on the beach than a human. So, many signs advise the visitors to pay much attention and keep a distance of at least 30 m between you and a seal. Winter is not only the season for giving birth, it’s als mating season. So, you can also see some fights between the adults (also there are fewer fights in January, because both, birth and mating season have reached their end).

Fortunately, most of the visitors behave good. But, every time you can see some people behaving very bad: going too close, standing between mother and baby, standing between animal and the see and so on. You got the picture. I guess, one day a seal could attach such a rude and ruthless human and I fear, that animal will be killed because of that. Next, they will be declared as too dangerous, and no-one will be allowed to visit them so easy.

Grey seals don’t attack humans. As long as you keep the distance, they stay calm. They look at you when you come nearer to check up the situation, but calm down again very easy. When they think, they are in danger, they start to hiss loud and show their teeth. A male might try to come a bit nearer to you (a few steps), but generally they tend to flee instead to attack.

P.S. when interested, I could help you to arrange a visit next winter 🙂 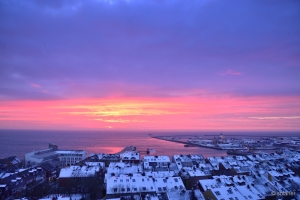 … from another re-visit: I was on Helgoland again.

I met with some friends on Helgoland and so I don’t edited many photos up to now. Nevertheless, I assembled a gallery of images for you. 🙂 It’s attached at the end of this post, as usual.

You know, during winter the gray seals get their babies – right in the winter here in the northern hemisphere. And we went, to see the babies 🙂

Unfortunately, the baby season was short this winter: nearly all of the seals gave birth during November and December 😦 Thus, they already left their babies alone, because they don’t need mother-milk anymore. So, we found several groups of adult seals and groups of growing children resting on the beaches. That’s not, what we expected to see, although they have had a very hight rate of new-born seals this winter: over 300 new-born gray seals in one season!

Luckily, we were able to watch two late nativities last week: #315 arrived on Wednesday and #316 on Thursday. A new record!

Here on Helgoland we have many free-living gray seals. They are the biggest free-living predator in Germany. An adult weights about 300 kg (> 660 pounds). They are here at home and allow us, to visit them. No fences between them and us and no fence to keep them from running away. They come and go following their own decision. As long as we behave properly, they will stay and don’t harm anyone.

But, there is much more to see. We were able to watch lots of guillemot in the cliffs of the main island (Helgoland has a small side-island called Düne, where you can find the seals) and even some northern gannets. Wow! They came very, very early to their breeding place this year. Helgoland is well-known for being an important breeding place of the guillemots.

Although, it’s winter now, we have had fantastic weather for taking photographs. Only one day with snow and hail storms, while the other days were sunny, but cold. Temperatures below 0°C, and a moisture of nearly 100%. Thus, it felt way colder, than it really was. Nevertheless, we were outside all day, despite the weather. But, we have had fantastic natural light – for the seals and much more for the birds. It will last a few weeks for choosing and editing these fantastic photographs.

Just in case, anyone of you is interested in attending a seal photographing workshop during next winter, drop me a line. I’m considering to offer a 2 or 3 day workshop for a max of 5 participants (minimum 3). You’ll be faced to a fantastic island with high cliffs and soft beaches, fresh air without traffic pollution (only electric cars are allowed on Helgoland), friendly people and the really amazing animals.

Helgoland and Düne are parted by water, crossed by a ferry several times a day. Once, both islands were Helgoland. The people from Hamburg used Helgoland as a stone pit to build their city from the red sand stone. A very heavy storm broke the small remain between the two parts of Helgoland and left two islands.