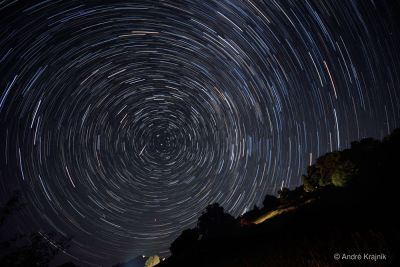 Two weeks ago, I was visiting my brother in Switzerland. I hoped for better conditions for star photography. You know, I’m living in one of the worst parts of Europe for this kind of photography because of the enormous rate of light pollution (get a light pollution map and find the purple area in the middle of Europe. South-East of it, in the red area, you can find my home area).

I was right, the conditions were much better, but not as good as they were in northern Norway.

The small, bright line heading from the center to the lower-left corner, is a falling star. In mid August you can spot the presides shower. While we saw some of them in the sky, I only captured this one with my camera.

In 1982 I saw an image of star trails for the first time in a magazine (I still have that magazine in my bookshelf) and was blown away by its beauty. Starting from that moment I wanted to create my own image of start trails.

Some time later, I was in northern Germany with some friends for celebrating Easter together. One night, when all the others already were in their beds, I was still up. At that time we didn’t have a problem with light pollution as we have nowadays. Although, that region is still a quite dark region. But, all over Europe you have serious problems seeing the stars.

Back to my story. That one night, while all of my companions were sleeping, I sat alone in the dark beside my camera loaded with a slide film, mounted on a tripod and equipped with a cable shutter release to keep the shutter open for the next about 60 minutes. Back home, I brought the film to a receiving office to get the film developed. About a week later, I got the film back. Unfortunately,  the film was cut in small pieces by the laboratory: one for each slide. But, they assumed the one darker image as underexposed. So, they used that space for cutting the film improperly. So, I got a wonderful star trail image cut in two pieces: 1/3 and 2/3. You can’t imaging how angry and disappointed I was. When would I be able to have a second chance?

Here in Germany, at least the weather will be happy to disturb you in your plans and send you some clouds when you don’t want them. So, I never had an opportunity to redo it. And, over time some priorities changed.

When I started with digital photography about 10 years ago, I still wanted to create a star trails image. In the meantime you were able to check online, where prosperous regions are. When looking on these maps, I got more disappointed: in Germany there is no location reachable from my home town. I’m living in the red to violet area. Even with a 200km drive it’s nearly impossible to find a location. Germany and middle Europe is very dense populated. So, only vacations would enable me to get such an image. Despite that, I checked some areas and even made some test images.

When I was on the Isle of Skye in April, per incident our talks went in the direction of photographing stars and the night sky during our last day. The weather that day was fine. Scotland is one of the darker areas in Europe and the Isle of Skye also. Everything I’d need was in my bag. I checked the weather every now and then after dinner and set my camera up at about 11 p.m.

The technique changed a bit during the last decades. Digital sensors overheat easily and the results get bad when having such a long exposure time. Instead, you have to take a series of images. All images with the same setting. Back home, you have to merge the single images into one to get your final star trails image.

In the image above, you can some clouds moving over the sky while I was photographing. Three planes (or satellites or the ISS) were passing by and in the right lower side you can see some light pollution from Broadford or Kyealakin (or both). The urban light spreads in all directions. Even the street lights are reflected by the road surfaces and send up to the sky and got reflected by the clouds. Because of the origins of the light and the kind of light this light is reflected in this ugly orange.

The light at the bottom in the middle is a house located on the other side of the Loch, about one km away, located directly at water level with the lights reflected in the water.

The above image is unedited. 29 images are merged. Each image got exposed for 30 seconds at f2.8, ISO 400 with a full frame sensor. I used a 14mm lens and a tripod.

When I saw the final result, I came up with the idea to create an animation from the images. My son was able to realize it and lay some relaxing music over the animation. Have fun!

This week’s topic for the weekly photo challenge by “The Daily Post” is “curve”.

The first try was more than 30 years ago on analog film, when I sat in the countryside for an hour and the lab cut my image into 2 pieces – now, we have too much light pollution here to see many stars and you always have lights from cities, houses and/or streets in you image

Take care have a great weekend!

(as usual, you can see the photo enlarged, when clicking in it)