Yesterday, I attended our monthly photographers roundtable. I guess, I already mentioned, this is more like a photowalk, than sitting somewhere and discussing photo related topics.

This time we were on a small hike (3 hours) through the valley of the river Düssel, not far from the place, where the fossils of the homo neanderthalensis were found in 1856. Today, this valley is also called Neanderthal (Neander Valley). Now, you can find a museum here and some other places donated to the times, when homo neanderthalensis was alive: the ice age. Kids can learn in workshops, how to make fire, spear, bow and arrow. They can even learn how people used to hunt during ice age.

I don’t want to bore you with all these details. Instead, I want to show you some impressions from the nature and the animals, homo neanderthalensis has hunted: the european bison or wisent and the aurochs. While wisents are still around in some eastern parts of Europe, the aurochs is assumed to be lost in the beginning of the 17th century. But, in the early 20th century, the brothers Heck, zoo directors in Berlin and Munich, tried successfully to breed the aurochs back from the common cattle. So, these animals aren’t real aurochs, but heck cattle. Over the years, the heck cattle became more and more look-alike to the ancient aurochs. A small herd of about 30 animals lives here and you can go and see them. I recommend bringing field glasses, just in case they are not near the fence. 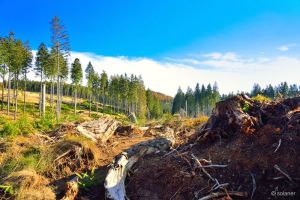 Because of a flu, I was able to develop some older photos this weekend. In October 2012 I was visiting a wisent resettlement project about a 2 hour drive away from here, where I live. Wisents are an old, wild kind of rind, the european bison. Once they lived all over Europe in the big forests, but they were eradicate nearly everywhere. Only in some parts of Poland, Czech Republic, Slovakia, Romania and so on, they were able to survive.

A few years ago, a peer got the idea, to get them back in his huge forests. Therefore he negotiated the conditions with the local government. Than he bought 13 animals from several parts of east Europe to form two herds. One herd was meant to be set free, while the other herd would be kept in a huge natural park to show them to visitors. This, because of the huge area the wild herd would be living in, and no one would find and meet them in the wild. Also, They expect, the wild herd to grow up to approximately 25 members and the captured herd up to 12 members.

My photos were all taken from the captured herd. The other herd was kept far away from men, to train them for a wild live. Any face-to-face encounter should be avoided, once they would be set free.

About 18 months ago the one herd of 8 members was set free, and at first they behaved as proposed, but then they made some problems in the forests: the eat the trees barks and thus destroyed many trees. Unfortunately, those trees weren’t in the peers forests, but in the forests of tree growers nearby.

Also, there were many unforeseen meetings between men (hikers, bikers and so on) and the wisents. No one was harmed. But, I can imagine, it’d be a strange feeling for people standing in front of such a big animal on a hiking path without any kind of fence in between. And there were many of such meetings reported.